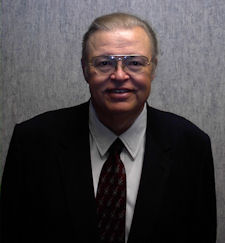 His 18 years of experience with NASA’s Marshall Space Flight Center gave him the abilities and reputation to build from these modest beginnings a strong innovative small business that “…has literally left its mark on the cosmos—where it is the only company officially licensed by NASA to paint the space agency’s red, white and blue logo on the orbiting International Space Station (ISS)” (“Technologies: A to Z,” Partners Magazine, Spring 2002). In fact, it is still the only company with space-stable color coatings; having coated other emblems on the ISS such as the European Space Agency logo, the Italian Space Agency logo, and the Unity module emblem, as well as various letterings and navigational targets and logos for the private space industry. In any recent movie where the space station is depicted, the white and black circles and squares, and the NASA and other logos you see were coated in our facility using our specialized space-stable paints.

Don Wilkes’ first obtained a contract for a flight experiment and instrumentation. He proceeded to build an engineering organization with a variety of technical skills and backgrounds. This allowed the company to leverage this base expertise into expanded areas of technology. Much of the company’s success came through the federal government’s Small Business Innovation Research (SBIR) program; a program to create greater opportunities for small businesses to perform government research and development. In fact, between 1989 and 2001 the company received 20 SBIR contracts and has developed many commercial products based on this research and development. This success was recognized in an episode of the PBS series “Small Business School,” on commercial benefits of the International Space Station.

Two important examples were the Optical Properties Monitor (OPM) and the Space Portable SpectroReflectometer (SPSR) that were developed under the protoflight concept in partnership with NASA, flown aboard the Space Shuttle and used on the exterior of the Russian Mir Space Station. These very successful programs included design, development testing, and verification of this hardware and included integrating the requirements for hardware performance, Shuttle, SpaceHab, and Mir payloads, and Extravehicular Activities (EVA) while maintaining a cost-effective program. Data from OPM and SPSR are still being used today (See System Report (pdf 12 MB) and Science Report (pdf 16MB) for detailed reports). The need to monitor the optical properties of materials in space is still very important. AZ Technology continues to be involved with experiments on Materials International Space Station Experiment (MISSE). See also MISSE Summary Report (pdf 540KB).

By 2002, AZ Technology occupied a 22,000-square-foot, fully tooled facility near Cummings Research Park, in Huntsville Alabama, a short distance from Nasa’s Marshall Space Flight Center. In addition to research and engineering, employees performed light manufacturing at the company’s facility, building a line of instruments, offering measurement services, producing paints, and performing coatings work for spacecraft, satellites and specialized terrestrial applications. At that time most of the company’s business came from NASA, though AZ also performed defense and commercial work.

In 2002, the founder began the process of stepping aside, bringing in his daughter as CEO, and thus continuing the tradition of a small family-owned company. To the detriment and sorrow of all that had known him and the scientific and business community at large, Don Wilkes passed away in 2006 after a long battle with cancer.

Since 2006, Ms. Leeper has been Owner, CEO, and President of AZ Technology. The company built a new facility a short distance away in 2016. This facility allows AZ Technology to handle coating of much larger hardware to about 10’ by 16’ depending upon shape and configuration. Though NASA remains an important customer for AZ Technology, the company continues to diversify and expand its product lines and customer base. New research projects in advanced materials and related instrumentation continue the tradition of innovation and technological advancement upon which the company was founded and built, and will allow the company to continue to grow and flourish.